Pat Kelly looks forward to serving Canadians in his new capacity, and appreciates the trust Andrew Scheer has placed in him. 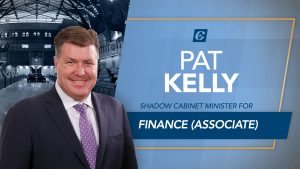