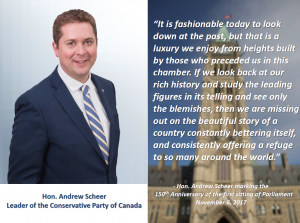 Mr. Speaker, for 150 years, our Parliament has been a reflection of Canada and Canadians. It is more than a building. It is the embodiment of our national character, its virtues and vices, its strengths and its weaknesses.

It has been burned to the ground and been built back up stone by stone. It has heard the echoes of gunfire, and felt the blast of a bomb that, thankfully, detonated mere minutes prematurely.

It has rung with cheers of victory at the end of two world wars, and it has stood mute witness to the tears of a nation mourning distinguished former members of this House lying in state, from Sir John A. Macdonald to the hon. Jack Layton.

This is a physical place, but also an institution, and as an institution made of human beings, the outcomes are not always perfect.

As Canadians, we must not forget our past. We must never be afraid to admit when we have made a mistake and to apologize when necessary.

That is why Prime Minister Harper came to the House nine years ago and issued a formal apology to former victims of the Indian residential schools on behalf of a country that had failed them. It was appropriate, because so many of the decisions that caused so much grief and suffering had been deliberated and, in some cases, approved right here in this building.

That we who have been trusted with the governance of Canada have sometimes failed should not be surprising. This chamber may be made of wood and stone, but the men and women who give it its life are hewn from the crooked timber of humanity. These chairs have supported patriots and heroes, but also a few rogues, so we cannot claim to have always been perfect, but we know that perfection is not available to us this side of eternity. Yet, somehow, the motley and imperfect assemblages that have gathered here over the last 150 years have achieved something of a miracle.

Together, the members who came before us superintended a Canada that has grown and flourished beyond what anyone in the first Parliament could have dreamed.

It is fashionable today to look down at the past, but that is a luxury we enjoy from heights built by those who preceded us in this chamber. If we look back at our rich history and study the leading figures in its telling and see only the blemishes, then we are missing out on the beautiful story of a country constantly bettering itself, and consistently offering a refuge to so many around the world. It is a story of different parliaments at different times, working through the imperfections of the day. It is a story that on the whole has been a story of hope for so many. It is a story of prosperity, compassion, liberty, and human rights.

To those who deny we have anything to be proud of as a country, I would pose a simple question: “Where else would you have rather lived for the last 150 years?” That is not a rhetorical question. It is a straightforward question for which there is only one honest answer. There is nowhere we would rather have lived, no country we would rather call our home, for no country has acquitted herself better at home and abroad than Canada.

It is indisputable that the world has been better off for the last 150 years because of Canada. Without the sacrifices of our soldiers, sailors, and airmen, more than 100,000 of whom paid the ultimate sacrifice, while many more came home bearing scars, mental and physical, the world would be more dangerous.

Without the brilliance of our artists, painters, sculptors, writers, singers, and actors, the world would be losing part of its cultural richness.

Without the work of the men and women who cultivate, farm, and develop our incredible landscape, who fish in our three great oceans that surround us, and who work in the towns, plants, and office towers, the world would be poorer, colder, and darker. If we dwell on past mistakes, we miss out on their remarkable successes. We end up taking for granted their contribution to Canada and Canada’s contribution to the rest of the world.

It is time for a little gratitude. Make that a lot of gratitude.

That we have prospered and flourished is no accident. It is a combination of good fortune and good stewardship. We are fortunate to have inherited the most stable and enduring political system in the world. We should be grateful to the members of the House who have nurtured and sustained it for the benefit of Canadians and the inspiration of the world.

For it is to this House that world leaders have come over the last century to express their admiration of Canada as the very exemplar of peace, order, and good government. It was here that Churchill came in Britain’s darkest hour, when Hitler’s armies were within sight of English shores, to thank Canada for our support and to display his jowl-shaking defiance in the face of Nazi aggression.

Later, we were engaged in a very different kind of war against Soviet imperialism, a battle not just based on geography but on ideology, a battle to defend the economic freedom that had created untold prosperity for so many millions around the world, yet a freedom that was denied to so many. During that battle, two of the great figures of the 20th century, Ronald Reagan and Margaret Thatcher, each came to this House twice to thank Canada for our friendship and dedication to key principles.

More recently, Ukrainian President Petro Poroshenko came to Canada while his country was suffering under a new Russian imperialism, to praise “the special partnership between Ukraine and Canada” and to salute Canada as a model for Ukraine and for the world.

It is in our nature as Canadians to be self-deprecating, but sometimes, maybe once every 150 years, it is okay to acknowledge what the rest of the world tells us: we occupy a special place in the fellowship of free nations and our institutions, including this Parliament, are the envy of other nations.

I am not asking members of the House to pat ourselves on the back and congratulate ourselves for assuming this awesome duty. Rather, let us roll up our sleeves and get to work in the House and across Canada to continue the work of those who came before us so that those who come after us, 150 years from now, will consider us worthy of the same gratitude we offer today to our predecessors.